The expansion mechanism may be a sleeve, slotted shell, slotted stud, or wedge assembly which is actuated by a tapered cone, tapered plug, nail, bolt, or screw depending upon the anchor style.

It is a penetration type casing anchor bolt. When the nut and bolt are tightened, the conical head of the anchor bolt is pulled into the expansion casing, and the expansion sleeve expands and presses on the borehole wall to play a fixed role. The compression of the expansion mechanism against the wall of the drilled hole allows the anchor to transfer the load to the base material. Anchors which are expanded by tightening a bolt or nut are considered to be torque controlled while those that are actuated by driving a nail or plug are considered to be deformation controlled. A deformation controlled anchor can develop a higher initial compression force when compared to a torque controlled anchor. Compression anchors may also be pre-expanded and/or used in conjunction with a drive nail. The expansion mechanism on an anchor of this style is actuated as it is compressed during the driving operation into the anchor hole.

▪Custom Sizes - Our unique mass customization manufacturing operation allows us to customize sizes far more easily than any other provider.

▪Requires a spanner or socket wrench to fasten or undo the bolt.

▪Ideal for heavy duty fastening of steel and wood structures walls and floors.

1.Make a hole of the right diameter and depth and clean it.
2.Place the expansion sleeve in the borehole.
3.Place the tool in the sleeve and hit it with a hammer until it stops at the edge of the sleeve.
4.Screw the expansion bolt into the sleeve until you get clear resistance.
5.The attachment is ready to accept the load. 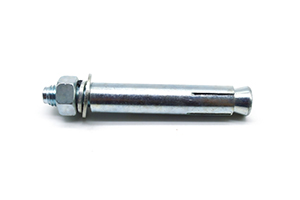 It is widely used in the construction and household spheres. They fasten various items, for example: steel structures, fence, handrail, support, staircase, mechanical equipment, door and other things. Suited for applications on solid and semisolid supports: stone, concrete, solid brick. Designed for joint scaffolding by means of extensions.

Want to win the competition?

YOU NEED A GOOD PARTNER
All you have to do is contact us and we will provide you with solutions that will allow you to win against your competitors and will pay you handsomely.

Your email information will be kept strictly confidential and our business staff will ensure that your private information is absolutely safe!